Some of the items were already state law, but are now enshrined in the Constitution to remove the possibility that the legislature could change or remove them. For example, the attempted ban on straight ticket voting by the legislature – which was eventually decided by the courts and is now protected by this measure. Two other provisions included would automatically register people to vote when they do business with the Secretary of State unless they specifically opt-out, as well as same day voter registration at the local clerk’s office.

In this week’s blog, Grassroots Midwest takes a closer look at one of the most notable changes to come out of these proposals; No reason absentee voting.

Several local clerks across Michigan spent the past year making a push to get citizens to sign up and be added to the permanent AV list and boost turnout by essentially making it easier to vote from home. So, in the first general election since this change, did no reason absentee voting make a significant impact in relation to turnout?

We gathered a small sample where AV and turnout data was available, most of which is concentrated in Oakland and Macomb counties. However, we were also able to gather a bit more information from elections outside that area where results were similar. AV voting rates were significantly higher on average, while turnout was either similar in many communities or higher where there were contested races, as you can see in this chart below: 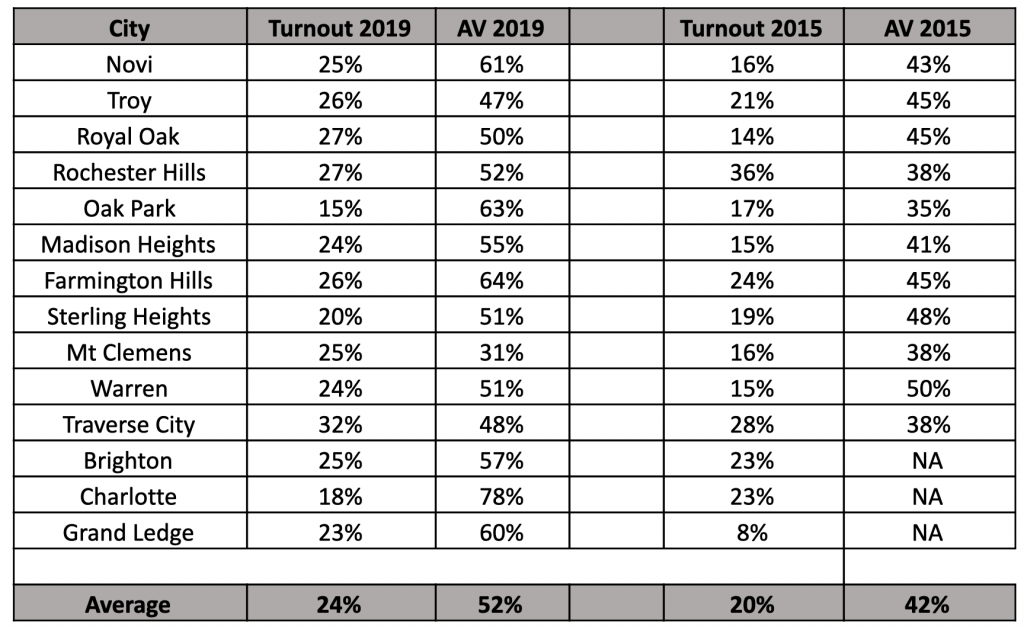 Whether more voters participate in absentee voting is also dependent on public awareness. In some communities, like Lansing, city clerks have made a strong push to educate voters on the change to no reason AV. If clerks across Michigan make a concerted effort to educate the public about no reason AV, we could see a minimum of 10% increase in absentee voting for the 2020 election cycle.

Turnout will likely not vary too much from the average presidential election next year, but what else is on the ballot could be a factor in getting voters activated. One proposal already slated to be on the ballot, for example, deals with funding for state parks and natural resource funding will be important for a variety of groups including sportsmen, environmentalists, and more. As a result,  AV participation will likely increase, but by exactly how much remains to be seen.

One thing that is certain in all of this? Candidates will need to run a strong AV program to get their message out early to an increasingly larger number of early voters. Candidates and campaigns that do not invest in robust absentee voter targeting and communication will go into election day with significant vote deficits that may be insurmountable. For more information on how the new rules and trends in absentee voting will impact your business or campaign, contact a Grassroots Midwest executive, to make sure that you are properly prepared to win.