Earlier this year, in June and August, Grassroots Midwest took a look at several municipalities that were gearing up for mayoral and city council races and provided some brief analyses of some races. With the elections behind us now, here is another quick look at select races from some cities across the Great Lakes state.

The big race in Michigan’s Capital City happened in the 1st Ward where the ‘Boomer vs Millennial’ debate played out in a political race. Incumbent councilmember Jody Washington faced a challenge from a young, energetic, progressive challenger in Brandon Betz. Other races included incumbents running for re-election in two at-large council seats and the 3rd Ward.  Here are the results: 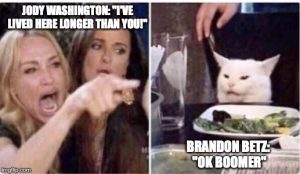 One of the big near misses of the night went to East Lansing, where long-time political figure, Mayor Mark Meadows, nearly lost his seat on the council. (The Mayor of East Lansing is selected from the Council and is not a separate office.) With three seats up and only two incumbents running for re-election, they were guaranteed at least one newcomer. Challengers Jessy Gregg and Lisa Babcock were the top two vote-getters, leaving incumbents Meadows and Erik Altmann fighting for that third seat. In the end, Meadows squeaked out a win over Altmann, besting him by only 2 votes based on unofficial results.

Grand Rapids saw a Mayoral race that was more of a rout than a true race, and two races for City Commission that were lively. The outcomes were:

In Jackson, the races to watch were the Mayor and two council seats. Mayor Derek Dobies won re-election, but in council races, an incumbent was knocked off and a former councilmember is making a return. Here are the results:

A lot of eyes were on Flint again as State Rep. Sheldon Neeley was taking on incumbent Mayor Karen Weaver. There is still a lot of distrust with government from many sectors in Flint, which makes being an incumbent facing a stiff challenge that much more difficult. Despite Weaver’s huge financial advantage and celebrity endorsements, Neeley dug-in against the mayor and channeled that public angst into a victory.

After coming in first in the August primary, Former State Rep. & Senator Laura Toy was unable to carry that momentum into November. She ended up losing to another familiar name in Livonia politics, Maureen Miller Brosnan by just under a couple hundred votes.

Ahhh… Macomb County. Everyone in Michigan loves to watch Macomb politics. Warren Mayor Jim Fouts faced Councilmember Kelly Colegio in his race for re-election. Even with several recordings of Fouts making disparaging remarks about nearly every group you could think of, he still managed to pull off a win. The more interesting thing about the win was that initially on election night, after all election day precincts were counted, Colegio was ahead by 400 votes! Then they started running those AV ballots and Colegio’s lead faded into a distant memory. (This is a good time to remind candidates that now more than ever, with the recent changes in state law allowing no-reason absentee voting, having a solid absentee voter plan is critical. Just ask Kelly Colegio. Call us at Grassroots Midwest… we can help you!)

In other Warren races of note, long-time Councilman Keith Sadowski was defeated in his race for City Clerk by Sonja Buffa. Former one-term state Rep. Patrick Green earned the most votes and an at-large seat on the city council.