Since the Senate is not up until 2022, future speculation about that map and the overall political geography isn’t as important.

In 2020 there are only 23 open seats, and only four are potentially competitive.

In terms of shifting demographics and the most recent elections, HD 38 and 61 are the two primary competitive elections, while HD 45 and 104 are only slightly less competitive, as you can see below. 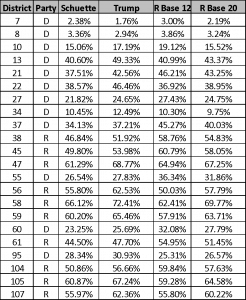 While reviewing the base numbers, one may not draw the same conclusions, but partisan base is only an average that takes time to catch up to the current climate. Part of that average is weighted by former Gov. Snyder’s impressive showing in Oakland County in 2014, while Donald Trump fared significantly worse in 2016 and will likely face similar problems in 2020. Once 2014 numbers are factored out, the numbers in HD 38, HD 45, and HD 61 look particularly good for Democrats moving forward, which may be exacerbated further by the overall weakness of the top of the ticket in 2020. Although Northern Michigan has been growing increasingly conservative, HD 104 has gone the other way because of the growth in Traverse City and the Old Mission Peninsula (due to downstate retirees). Voters outside those areas are still very much the people you expect to be living in northern Michigan. As the county continues to grow, it is possible that a few of the rural townships will need to be drawn into another district to significantly boost the chances that the democrats can regularly win at least two seats in northern Michigan (the other being HD 109 in Marquette).

Of course, both parties will challenge for the seats that changed hands in 2018, but I’m not sure how many can be flipped back. We have some deceiving base numbers where several of the seats democrats took in 2018 would’ve been considered safe republican in 2012, but those seats, much like the northern and rural seats, are trending fast. On paper, HD 40’s base suggests it’s a swing seat, but looking at board results, the existing trend down, and the poor performance by republicans at the top of the ticket suggests HD 40 is gone, depending on the map in 2022.

The chart above provides a bit more depth regarding the seats that flipped in 2018, and helps us understand future shifts in the electorate. HD 20, 40, and 41 have taken hard turns left and would be tough for republicans to get back under the current map, while HD 19 and 71 are still pretty competitive, especially HD 71 with the rural offset to Delta township. HD 72 is the other true competitive seat that didn’t seem possible in 2012, but is now approaching swing territory thanks to rural voters. As for HD 110, like most of the UP, it’s making a strong right and it should be relatively easy for republicans to keep the seat.

While republicans held HD 39 this past cycle, that is largely due to the democratic candidate being charged with multiple felonies only a few weeks before the election. Prior to the charges, polling suggested a Democrat advantage of 5 plus points.

The possibility is there for democrats to get majority in 2020; however, they will all have to contend with a new map creating challenges – especially with population growth in the suburban districts which will likely get smaller in size, and potentially pit incumbents v. incumbents, or place incumbents into new districts. 2020 candidates should strongly consider that due to the federal redistricting case, we could potentially have new maps for 2020 before we draw new ones in 2022, further complicating the math.

We shall see what is brewing nationally and statewide and revisit this down the road.